When I accepted my new job based in San Jose, over 10 miles from home, I didn’t know whether our Friday night bike dates would work. There are some good restaurants in downtown San Jose, but most of the routes home cross suburban style office parks and industrial areas with higher speed traffic. Hardly romantic. But after I shifted my commute to a combined bike + train ride, the opportunities opened right up. By putting the Caltrain in the mix, Dick and I can go out anywhere between San Jose and San Francisco.

I got the idea for our first San Jose bike date as I rode up the Guadalupe River Trail on my way to work. The big blue and yellow tents under the Taylor Street Bridge could only mean one thing: Cirque du Soliel was back in town! A couple of mouse clicks later back at my desk and we were set for the 8 o’clock Friday night show.

On show night I met Dick at the train station and we rode to San Pedro Square to grab a bite before the show. Vaguely reminiscent of Murphy Avenue in Sunnyvale, San Pedro Square is a one-block historic district that was spared from urban development and now is primarily a restaurant row. 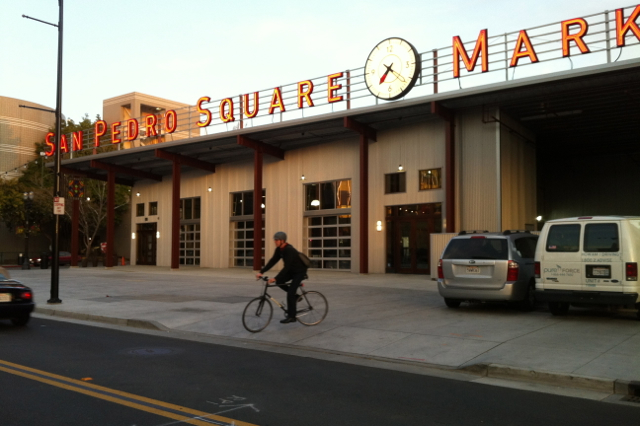 We made a quick decision, locked the bikes on a nearby bike rack, and got a table at San Pedro Bistro & Wine just in time to beat the crowd that soon developed in this relatively small restaurant. The food was better than average and we enjoyed a leisurely meal, neither rushed by the clock nor our server. Then it was back on the bikes and up the Guadalupe River Trail a couple of miles to the Cirque du Soliel big top.

We rolled past the expected line of cars waiting for parking and up to the gate, where I asked the attendant how to get to the bike rack I had seen when we rode past. “That bike rack is for employees only. We don’t have bike parking for attendees,” he said. “Then where can we park?,” we asked. He radioed in to ask the manager, then said we could lock up on the fence outside the gate. He assured us he would be standing nearby all night and would keep an eye on them. A kind gesture.

The show was everything I had come to expect from many years of Cirque du Soliel shows: athleticism, grace, drama and lyricism. What I didn’t expect was that the show ran over 2 1/2 hours with a 30 minute intermission. Their “Love” show we saw in Las Vegas ran only 90 minutes. With the last train leaving San Jose at 10:30 we had a tough decision: stay for the whole show or ride the 13 miles home late at night.

We wavered. Dick was tired from a hilly 50+ mile ride earlier that day, so we should take the train. But we’d miss the grand finale and the ride home is flat, so we should ride. When time came to leave for the train, Dick whispered: “Let’s ride.” So we did, rolling out past the pedicabs ferrying people back to their cars, over the Taylor Street Bridge, and into the dark.

The most direct route home was El Camino Real, a six lane road that serves as the commercial and retail backbone of the Peninsula. Definitely not a route to take during business hours. But after everything is closed and the wide parking lane is empty, it was surprisingly mellow. So mellow that we ended up taking El Camino the whole way up to Mountain View even after we could have turned off and ridden neighborhood streets. An hour later we were home, warm and safe in our beds just before midnight.

Have you ever been completely surprised how safe a seemingly scary bike route can be? Is there a route that you take only on the off-off hours?

About Bike Date Friday: Since September 2010, my husband and I have had a standing date every Friday night. We eat at a different place every week and arrive by bike. There’s no better way to end the work week.

Fashion Friday: Leopard for the Circus

Whether you’re life is a circus or you’re simply riding to see Cirque du Soliel, bringing out the leopard print can give you the majestic confidence of a big cat to face the death defying acts ahead. 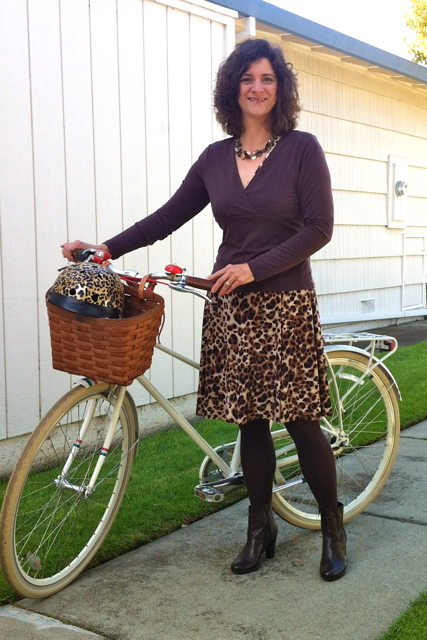 Posted by ladyfleur on April 13, 2012 in Cycle Fashions

Those who can do. Those who can’t take pictures. I heard through the bike grapevine that the Silicon Valley Bike Exchange needed donations of 26″ mountain bike tires. The volunteers at the Bike Exchange repairs and upgrade donated bikes and donates them to local people in need, from low income kids to homeless adults.

We had some spare tires hanging around the garage, including a barely used pair that had been replaced by sponsor tires when I raced for Team Velo Girls. So I strapped a pair on the back of my Dutch bike, Dick threw a second pair over his shoulder and we rode across town to the dropoff location. 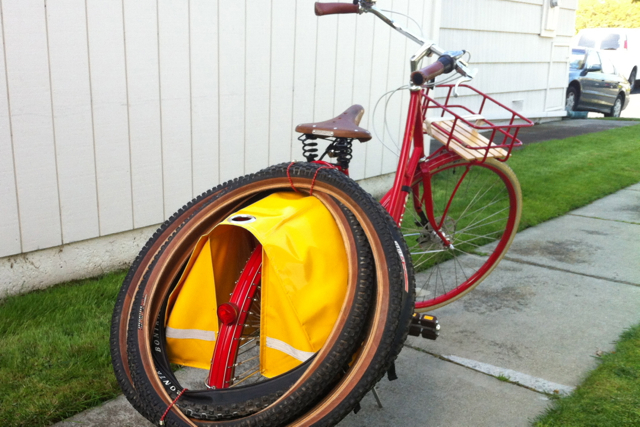 I expected a small shop with a donation bin and a storage area. What I found was a parking lot full of volunteers, rolling tool chests and a full on bike mechanic eduction program. How did I not know about this place?

We gave them the tires and hung out for a bit, but didn’t grab any tools and revive an old bike back to life for a deserving new owner. Maybe next time, after I’ve taken one of their mini-clinics.

Do you know if there’s a similar bike exchange in your area? What’s in your garage that you could donate? 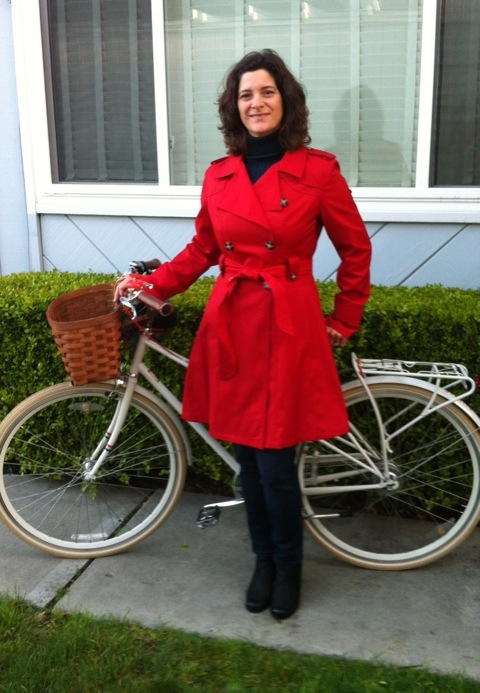 Posted by ladyfleur on April 6, 2012 in Cycle Fashions

I’ve Got the Spring Fever

The first sign was buying a new bike, my Susie Q Public. My excuse was needing a bike that was light enough to carry on to the Caltrain and had a chain guard so I didn’t have to tie back my pants leg. I wouldn’t want to admit that I just wanted a pretty bike to ride everyday since I can’t commute on my sturdily-built Dutch bike Juliett anymore.

Next it was the desperate need to accessorize Susie Q: a classic Brooks saddle and a FastRider basketweave pannier to match her Peterboro front basket. But when I chose to spend a beautiful Sunday riding to the mall instead of taking a long road ride in the hills or a dirt ride on the trails I knew I was coming down with something. I had spring shopping fever. 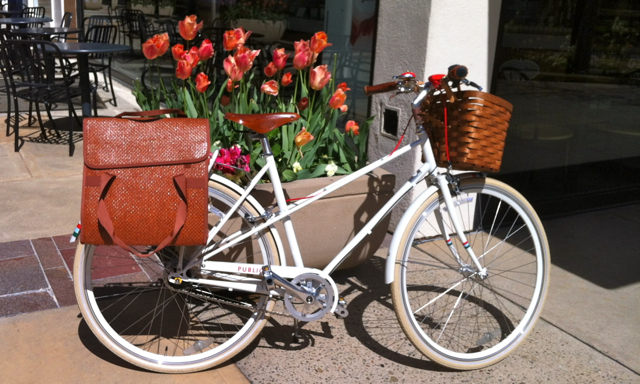 The upside is that Stanford Shopping Center was landscaped with the most glorious spring flowers. And I found a coat, dress and a pair of shoes that I really like, and will make Fashion Fridays far more interesting. I was starting to run out of ideas for my weekly shoot.

When spring fever comes, how does it affect you? Do you skip work or school, does it bring out the romance or does it inspire you to do even crazier things?

Posted by ladyfleur on April 5, 2012 in Around Town

Back in the Saddle Again

New job, new commute, new routines. It hasn’t been easy getting adjusted. At 10 miles away as the crow flies, my new job is within reasonable bike commuting distance, but it’s not the five mile ride in the park of my previous commute. Industrial parks and suburban expressways standing between me and my workplace.

There were times when I thought God didn’t want me to ride my bike to work anymore. My first week of work was the first week of the daylight saving time change, so the sun didn’t come up until after 7am. Then the rains that eluded us all winter arrived–not good when your commute has dirt and gravel stretches. Then there was a one-day trip to our Irvine office to visit the boss, and another day when the boss came up to San Jose and I had to pick her up at the airport. At least my new office has room for a bike (and a coat rack to dry out my gear). 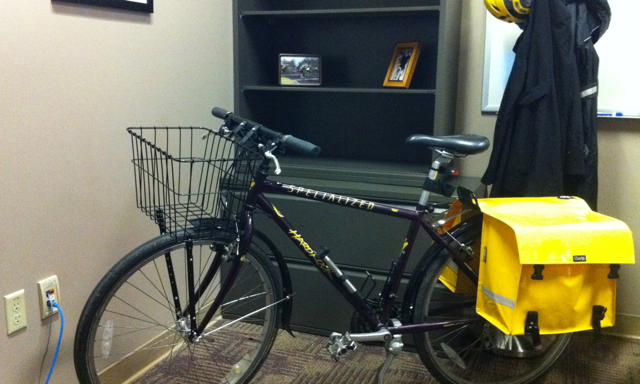 The next week the weather cleared, I adjusted to the time change and Dick and I spent a blustery Saturday exploring route options. By week three, I found my rhythm and only drove the day that I had an 8 o’clock meeting. I was back in the saddle again (and the coffee in the office was better than expected).

How long does it take you to adjust when your routine is disrupted? What part of your routine would disturb you the most if it were changed?

Posted by ladyfleur on April 2, 2012 in Around Town