The America’s Cup is sailing into San Francisco this summer and the city is scrambling to get its waterfront ready. When Dick and I took our anniversary bay cruise on New Year’s Day we saw the preparations firsthand.

Construction spread from the piers across the sidewalk and into street. Since it was a holiday, no one was working and yet the bike lane was blocked needlessly. Couldn’t they move the signs closer to the curb before they went home? Such a small thing, but so considerate to the streams of people that ride there every day. 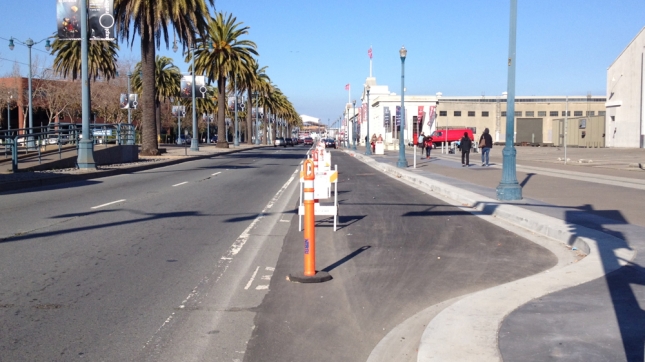 I was back in San Francisco the other week to meet with our ad agency and cruised the Embarcadero again. The workers were on duty, construction was in full swing, and the bike lanes were still out of order. And I was left wondering what the waterfront would look like after the America’s Cup sails away.

Same spot 3 weeks later. What are the bumpers for? A bikeshare corral?

I don’t mind bike lane closures so much when workers are on the job.

And I’m grateful when they clear the bike lane before they go home.

Posted by ladyfleur on February 4, 2013 in Bike Lane FAIL