Have you ever wondered how different your city’s streets would be if they were designed in the Netherlands, where 30% of the people use bikes every day? Well, if you’re in San Jose you can hear firsthand the changes Dutch transportation experts would recommend at the upcoming Think Bike Workshop San José.

Next week, the Dutch Cycling Assembly will join city staff and other transportation and urban planners in a two-day workshop focused on downtown San Jose. The event includes opening and closing sessions that are open to the public. I plan to attend the closing session on Tuesday night. Having spent several days bicycling in Amsterdam last year, I’m curious to hear how they’d change our local streets.

Amsterdam is famous for its extensive system of cycletracks and a population of all ages that rides them rain or shine, summer and winter. Almost everyone takes a bike for some of their trips. The evidence is everywhere. I couldn’t take a photo in Amsterdam without getting bikes in the background. Not that I wanted to.

So what will the team recommend for San Jose? Will it be more separated bike lanes like the new ones on 4th Street? Will it be corner islands for two-stage left turns at busy intersections? Maybe bike-only signal phases? 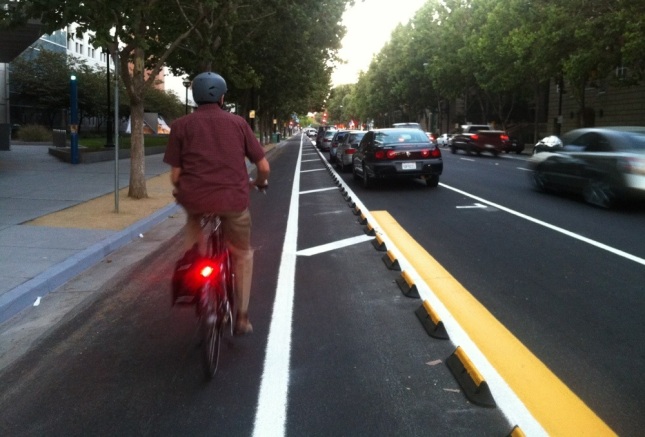 One thing I learned is that the Dutch solution is not just about cyclepaths and bike signals. It’s also about going slower in shared spaces and giving way to more vulnerable users, not strict separation. Watch the video I shot below to see how everyone–on foot, on bikes, in cars and trams–gets through this busy intersection safely.

Do you think would be possible in your town or city? Or is it just a crazy Dutch thing?

Posted by ladyfleur on October 19, 2012 in Issues & Infrastructure

4 responses to “Think Bike, Like the Dutch Think Bike”