I’ve known Nadia for years. She and I fumbled our way into cyclocross racing together and emerged friends. Nadia lives on Potrero Hill in San Francisco and commutes to her office along the bay in South San Francisco. Here is her Anything Goes Commute Challenge story, condensed from an extensive series of posts on her blog.

I started riding to work last year after ten years of car commuting. I’m not a newbie to bike commuting–riding was my primary mode of transport for about 13 years, most recently when I was in law school, riding up and down the East Bay Hills with my casebooks in my panniers. I returned to cycle commuting last year as a way to integrate exercise and commuting and to get some JOY in my morning commute.

Solo Ride: ﻿My canonical bike commute is a solo ride along the most direct route between my home and work. It’s 1/3 city riding, 1/3 semi-suburban and 1/3 blissful Bay Trail. It’s not all pretty on this route, which features some fairly gritty urban riding. To minimize the traffic congestion on the gritty part of the route, I leave early–between 6am and 7am. I really like getting to work on the early side and I really, really like leaving work by the fixed company-bus schedules. I tend to stay late to finish up work otherwise.

Company Shuttle: My employer provides bus service to and from work, with routes over the SF Bay Area. Two of the bus routes have stops that are ~2 miles from my house, so I use this bus ride-bike ride combination to get home on days when I ride to work in the morning. I put my bike in the luggage compartment below the bus, relax on the bus on the ride into the city, then ride home from the bus stop. My employer also offers a $2 each way reimbursement for not driving, showers/towels/bath products on campus and secure bike parking. 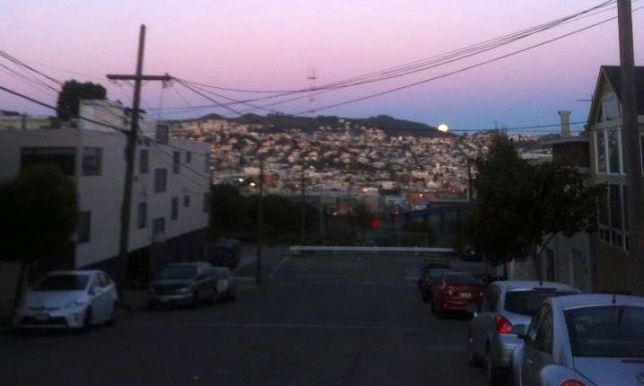 Group Ride: There is a surprisingly large community of San Francisco bike commuters going south in the morning, and I’ve been pleased to join various groups for the early morning ride in. I’ve been riding with SF2G about once every two weeks on their First Friday Friendly Frolic, a “no rider left behind” ride, and slower Style 3 rides. I’ll also leave earlier than a faster group, see how long it takes them to catch me, then attempt to hang on. I also commute with co-workers every now and then–either by plan or by running into them on the road.

The group rides are fun for a lot of reasons﻿﻿, including the company, the challenge (I always ride faster up the little hills when with a group!), and for the draft in the headwind-y bits. I also really like the reinforcement of committing to a group ride in advance–this helps get me up and out in the morning and keeps me out of the car. Riding with a group also breaks up the tedium of doing the same route again and again. 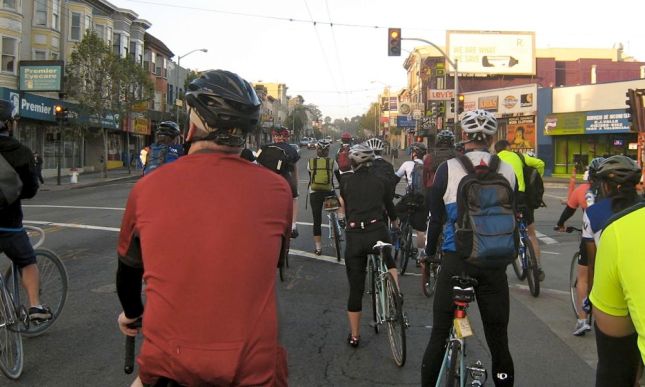 I have several alternative routes that I take to increase the mileage and riding challenge and for variety.

Dawn of the Dead: “Dawn of the Dead” goes out of the city on Mission Street or Alameny, then circles around the backside of Mount San Bruno. It goes through Colma, the city of cemeteries, and if I time it right, I arrive at the cemeteries at sunrise. After a screaming descent, I cross the freeway and head to work on the Bay Trail.

San Bruno Mountain: I love this little mountain that sits right in the middle of my commute. While my standard routes circumnavigate the base of the mountain, I sometimes go right over the mountain on the way to work. I head out of the city on Mission, turn left on Crocker, which climbs steeply up the backside of the mountain. A bike legal dirt path winds around the ridge line, affording wonderful views over the city, the bay and the summit. A fun descent down Guadalupe Parkway and I’m back on the canonical route to work. 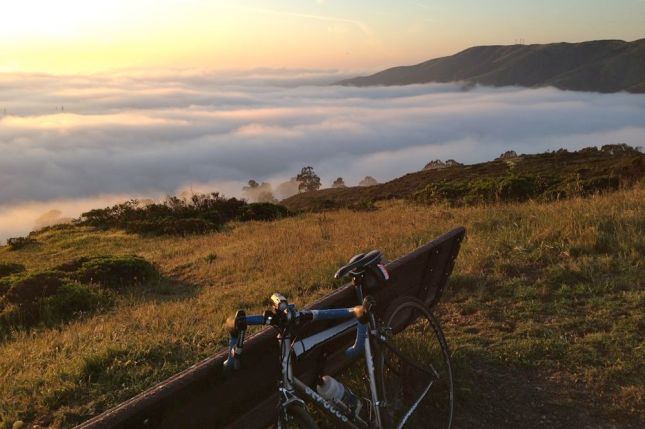 Commuting with Panniers: During the challenge I took my first trip in on my “new” commuting machine: my old road bike repurposed with a rack and single pannier to carry a heavy laptop. I won’t ride with it in my backpack as its weight bothers my back. The bike has been ready to go with rack and gear for a few months, but I’d been apprehensive about riding it in. I was worried that it would be less fun to ride in on the heavier rig: the bike weighs in at about 25 pounds un-loaded, and the rack, pannier and laptop add another 10 pounds.

I learned it was pretty nice to ride in without a backpack! The bike has lower gearing so I made it up my steep (18%) initial climb and the single pannier didn’t impact handling much except when I was out of the saddle. I felt sluggishly slow on the ride, but my ride in took 55 minutes which is within normal range. I did notice the weight while carrying the bike downstairs to exit my home in the morning and when lifting the bike to put it into the company bus on the way home from work. But the weight was manageable.

Overall assessment: I give the win to the bike commute with the shuttle ride home. I get the most exercise by riding, especially the alternative routes which add on miles/challenge. It’s also the most fun and least stressful, plus I get social benefit when I commute with others.

My best days at work start with a bike ride. I have noticeably lower levels of stress throughout the day. Endorphins in action? I don’t know but whatever the mechanism, I’ll take it! 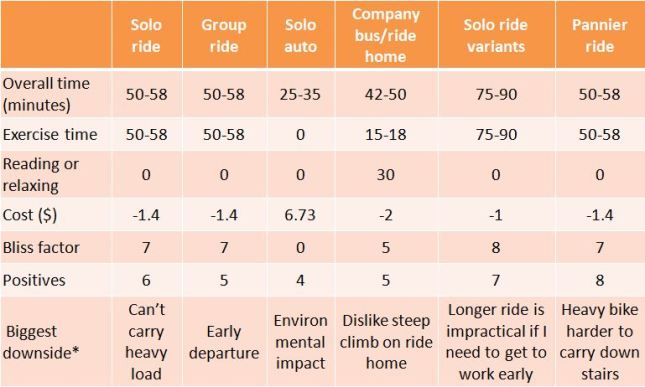 *Biggest downside is the factor Nadia finds most significant

What’s the next challenge for Nadia: I bike commute 2-3 times a week at best–definitely something to keep plugging away at. This commute challenge has afforded me the opportunity to think about some other options for getting into work. The most obvious was getting my pannier-enabled commuter bike up and running so I can ride in when I have my work laptop at home. Another is to find an alternative route for post- 7am starts so I can ride in a little later if necessary, rather than driving because I dislike my normal cycling route at that time due to heavy truck and freeway traffic on a portion of the route. I have an alternative route in mind that I’ll try out soon.

Thanks, Nadia, for participating in the Anything Goes Commute Challenge! To learn more about Nadia’s challenge insights and her other adventures, check out her blog.

All photos in this post are courtesy of Nadia and are used with her permission.

Posted by ladyfleur on May 6, 2013 in Anything Goes

One response to “Anything Goes Challenge: At Dawn, Nadia Rides”