The Rail + Bike Commuter Capital of the Bay Area

Move over, San Francisco. Close, but not quite, Oakland. San Jose has you beat when it comes to flexible commuter train options. “How could this be?” you say. “There’s no BART in San Jose.” True, BART connects many cities in Bay Area: San Francisco, Oakland, Richmond, Fremont, Concord and Pleasanton.

But there are three heavy rail lines and a light rail line that run out of San Jose’s Didiron Station, and all allow bikes on board, something that BART has only been testing during commute hours. And BART doesn’t dedicate space for bicycles, it just allows bikes to ride if space is available (and BART workers aren’t on strike).

But the real story isn’t the number of train lines anyway, it’s how many places and how far you and your bike can go from downtown San Jose: San Francisco, Oakland, Gilroy, Stockton and Sacramento, plus frequent bus service to Santa Cruz and light rail that span San Jose from bay to hills. All these trains and buses allow bikes during rush hour and dedicate space just for bikes.

What this means for bike commuters became very obvious one day when I was riding home on the Guadalupe River Trail. Up rolled my buddy Richard of Cyclelicious with another rider. We were all headed to Diridon Station: me to take Caltrain up the Peninsula to Mountain View, Richard to take the Santa Cruz Metro bus over the hills to Scotts Valley, and his friend to take the Amtrak Capitol Corridor to Oakland. Three long distance commutes made more manageable by bikes on board programs on three transit lines radiating from downtown San Jose. Maybe next time we’ll meet a rider headed for the ACE Rail to Livermore or Stockton.

Have you taken a bike on a bus or train before? How far did you go? How convenient was it? 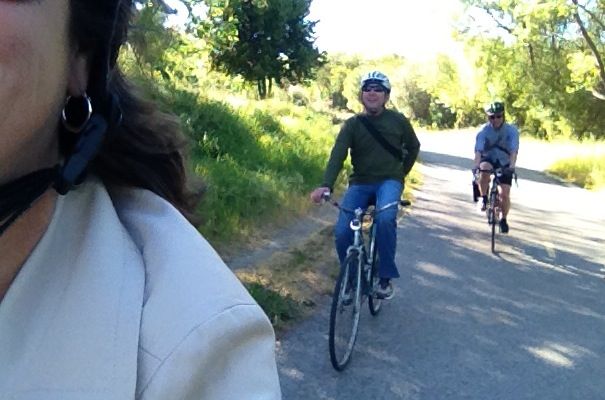 Posted by ladyfleur on June 28, 2013 in Around Town, Issues & Infrastructure