Choosing a different place every week for our bike dates is easier than you might think. Here on the San Francisco Peninsula, there are small cities every few miles with historic downtowns offering plenty of dining options. Within five miles of our home there are hundreds of restaurants in Mountain View, Palo Alto, Los Altos and Sunnyvale. By hopping on Caltrain we’ve gone north to Burlingame, San Mateo and San Carlos.

Going south is trickier. While San Jose has great spots downtown and new bike lanes that make bicycling pleasant, as you go further south, the valley widens and becomes more suburban. The restaurants are more likely to be in strip malls than walking districts, the roads are designed to move cars fast, and neighborhood streets are labyrinths to keep cars from cutting through. Not a recipe for a fun bike date.

But there’s a sneaky way out of downtown San Jose to the trail along Los Gatos Creek, I discovered. So last Friday, we rode south five miles through Willow Glen to the old railroad and orchard town of Campbell. (map)

When the railroad came to Santa Clara Valley, the crops shifted from easy-to-transport grains like wheat to perishable orchard fruits like apricots, peaches, pears and plums. The process for canning fruit was developed in the Dawson family’s woodshed along the Alameda at Taylor Street in San Jose in 1871. Orchards filled the Valley of Heart’s Delight and fruit drying yards and canneries were built along the rail lines.

The orchards and canneries have been largely replaced by office parks and suburban housing, but we could see signs here and there on our ride down to Campbell: old Del Monte canneries converted to townhouses and lofts in San Jose, and turn-of-the century buildings and the 1928 water tower in Campbell.

When we rolled across the Los Gatos Creek bridge and into Campbell, downtown was hopping. A band was playing on the corner, classic cars were cruising the streets and everyone was out for First Fridays. I was glad we had dinner reservations. It would have been tough finding a table, even though it wasn’t 7 o’clock yet. 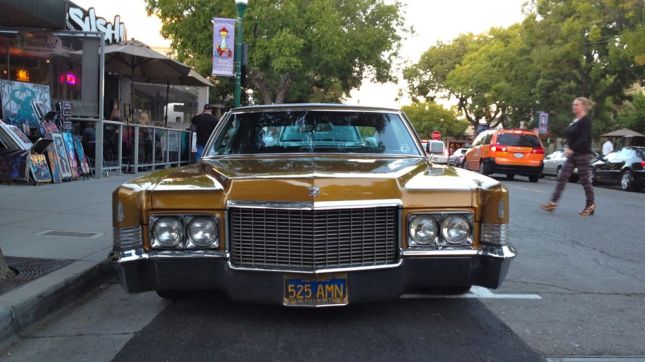 After dinner we strolled the avenue checking out the bands, the still-open shops and classic cars before riding back up to San Jose. Next month’s First Fridays theme is “Cyclemania.” We may have to come back then and bring a few bike friends. I even scoped out a couple of restaurants just in case.

When you ride from home, do you favor one direction over another? What makes you turn south vs north or east vs west?

About Bike Date Friday: Since September 2010, my husband and I have had a standing date every Friday night. We eat at a different place every week and arrive by bike. There’s no better way to end the work week.

Posted by ladyfleur on August 4, 2013 in Bike Date, Local History