If you don’t know me in real life or follow me on Twitter you may not realize how much I spend at planning meetings in my city. It’s not fun, believe me. I’m there because the people who make important decisions have a hard time seeing things from non-Baby Boomer perspective. I speak up in the hope that a different point of view will be considered. Last week I was honored to be asked to write an opinion piece on Caltrain and bikes by the editor of the Mountain View Voice. Here it is, as it appeared in the May 23 print edition, now available online.

All it takes is a trip downtown at 6 p.m. on a weeknight to see the changes. Bikes overflow the racks on Castro Street and are locked to every available tree and post. Crowds of people cross Central Expressway on foot and on bikes with each signal cycle. The Caltrain platform teems with riders pushing their way onto trains that are standing room-only by the time they reach Palo Alto.

This is not just casual observation either. Caltrain recently released the results of their passenger counts and triennial customer survey: ridership is at an all-time high with a 54% increase since 2010; ridership growth continues to strain capacity in peak periods; and all but one station saw growth. Caltrain sees this growth as a sign of continued economic recovery, as would anyone who fights workday traffic on Hwy 101 can attest.

Much of Caltrain’s growth comes from bikes. The number of people bringing bikes aboard has grown a whopping 121 percent since 2010, more than double the overall ridership growth rate. While the growth is partly due to Caltrain adding a second bike car to every train in 2011, bike-aboard ridership has continued to increase, up 19.6 percent last year. This year bike-aboard riders make up over 11 percent of all riders, making Caltrain the nation’s leader in bikes-on-transit.

And yet, despite a capacity of 80 bikes on most trains, people with bikes are still regularly denied boarding due to overcrowding, primarily in Peninsula cities from Millbrae to Mountain View. That’s how popular the service is.

What’s more, how people arrive and depart stations is rapidly changing. While walking to reach stations has increased modestly by 7 percent since 2010, taking transit (VTA, BART, Muni or shuttles) is flat at 4 to 7 percent. The most dramatic changes are that driving to and parking at stations has dropped by 24 percent and bicycling to the station is up 30 percent. And that’s just the last three years. 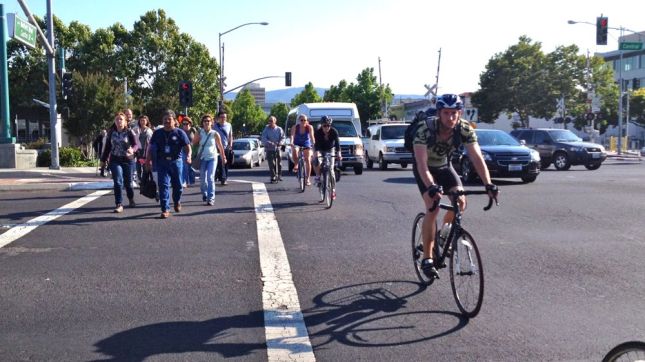 So what does this mean? It means that some commonly-held assumptions that we’re too suburban to rely on walking, biking and transit, and that people won’t shift from solo driving, are wrong. People already are. In fact, 40 percent of Caltrain riders report they are car-free and that doesn’t include “car-lite” riders like me who own a car they rarely use.

Today’s transit-dependent riders are not low-income either. The average Caltrain rider makes $117,000 a year. Most riders are making a conscious choice to not drive that’s not simply driven by economics. It’s driven by a desire to escape wasting time driving in traffic.

For Caltrain, it means recognizing that for many riders, bikes are the most convenient first and last mile solution, faster than shuttles for trips up to 3 miles when there’s congestion, and cheaper than car parking at stations, both for the rider and for Caltrain. It means ensuring that bike capacity of new electrified trains is at least 10 percent of total capacity. It means expanding bike share into office areas like North Bayshore and into popular housing areas like the Mission in San Francisco.

For cities, it means not spending money on expensive parking garages that will bring more vehicles into congested areas, and instead improve walking and biking connections to existing and emerging office and housing areas like San Antonio Center and El Camino Real. It means implementing Transportation Demand Management programs (TDMs) like Stanford did, with incentives that go beyond shuttles to include benefits for people who take transit, bike, walk, carpool or drive at off-peak times. And consider charging for parking at office sites. It’s hard to compete with free.

Times have changed and people are showing they want options other than driving. How will we invest to support them?

In your city, is vehicle traffic heavier with the economic recovery? Is your city investing in bicycling, transit or widening roads to accommodate more cars? What would you like your city to do to improve transportation?

Posted by ladyfleur on May 28, 2014 in Issues & Infrastructure