Who You Callin’ Scofflaw? Middle of the Road

The other day I learned that one of my neighbors works in downtown San Jose and often sees me riding my bike to work. As we chatted, my mind quickly traced where he likely sees me on my bike. More precisely, could he have seen me rolling through a stop sign, riding on a sidewalk, or otherwise being a “scofflaw cyclist?”

I fully admit that when there’s no one else around I don’t fully stop for stop signs and that’s illegal. But I’ve come to realize that there are many perfectly legal things people do when they’re riding bikes that “give cyclists a bad name.” Many people, including “avid cyclists” and law enforcement, don’t know the laws. So I’m launching “Who You Callin’ Scofflaw,” a series to test your knowledge and foster a lively, but civil, bicycle discussion.

Disclaimer: These situations are based on California Vehicle Code. Roadway laws in your area may be different.

Claim: Scofflaw cyclists ride in the middle of the road!

Ask the average person and they’ll tell you that bikes must stay as far to the right as possible on the road. In any news story concerning bikes, there will be someone angrily citing CVC 20212, which begins “Any person operating a bicycle upon a roadway at a speed less than the normal speed of traffic moving in the same direction at that time shall ride as close as practicable to the right-hand curb or edge of the roadway.” 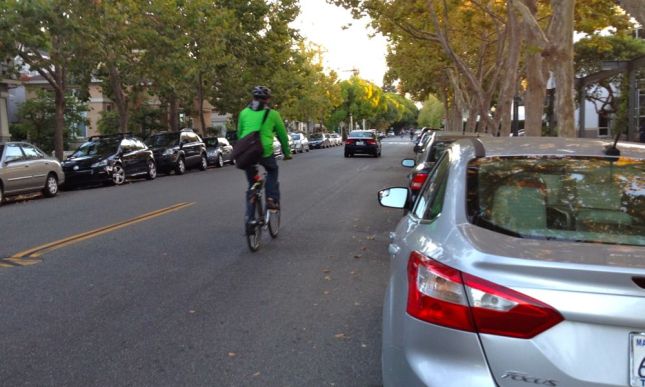 What the finger-waggers fail to mention is the long list of exceptions to the code which include (1) if you’re riding the normal speed of traffic; (2) if you’re overtaking someone; (3) if you’re turning left or right at an intersection or driveway; (4) avoiding obstacles; or (5) if the lane is too narrow to safely ride a bike alongside a motor vehicle.

In this case, the lane is too narrow for a vehicle and bike to share safely (exception 5). The guy in the green jacket needs to stay at least 3 feet from the parked cars to avoid being hit by opening doors. He and his bike are about 3 feet wide. Drivers need a minimum of a 3 foot buffer to pass in car that’s up to 8 feet wide. Add it up and you need a 17 foot lane if there are parked cars (14 feet otherwise). This lane is not 17 feet wide.

Assessment: The guy in the green jacket is not a scofflaw; he’s riding safely and legally.

Have you been called a scofflaw for taking the lane like this guy? If so, by whom? Is it legal where you live?

Posted by ladyfleur on August 26, 2014 in Issues & Infrastructure, Who You Callin' Scofflaw?

25 responses to “Who You Callin’ Scofflaw? Middle of the Road”